The Central Government has identified the media and entertainment industry as a large scale industry where it was a USD 11 billion dollar industry with a compounded annual growth rate of 18% as per 2008 reports in a paper by Ernst and Young.

As Per FICCI-EY 2019 report, the media and entertainment industry in India is estimated to have revenues of approximately $25 billion with a CAGR of 13.5 %. Ours is a culturally rich country, however, the revenues earned is not in phase with the creative richness and diversity in the country. There has clearly been a decrease in the CAGR of the market owing to the high rate of piracy and counterfeiting and loose legal regulations protecting these intellectual property rights.[1]The rampant usage of smartphones and cheap data has proved to be a necessary bane for the media and entertainment industry. Not only is it responsible for the inadvertent growth of the music and entertainment industry due to the easy access thus helping the music industry to cross the INR 1000 crore mark for the first time, yet it has been seen that piracy is still as high as 67 per cent and causes an estimated loss of $959 million (Rs 4,411 crore) in revenue and around 5,71,896 jobs.[2] Comparing the Chinese M& E industry with the Indian industry since it has also been affected with a rate of piracy as high as 74 per cent compared to the 67 per cent in the Indian scenario.Chinese music has been lagging behind India till 2014 but owing to its efficient anti-piracy programme of registering 200-500 complaints with an 80-90 per cent solving efficiency, in 2019 its position has been uplifted to 7th position in the world and by 2022 it’s expected to be amongst the top 3 in the world earning revenues as high as USD 1400 million while India only ranks 15th accruing revenues up to USD 156 million. Howsoever The Chinese music industry lagged behind India till 2014. In 2019, it ranks at 7th and by 2022, it is expected to be amongst the top three in the world with revenues up to $1,400 million while India ranks 15th with revenues accruing to $156 million.Also, the high takedown efficiency of about 97% in the Chinese industry is a contributing factor to the growth of the industry and curbing the leakage due to piracy. The number of apps embedded with pirated content grows by the hour. As per IFPI, there were 467 in 2019 hosting illegal Indian content.[3]

With better diplomatic ties and better utilization of the multi-lateral trading platforms of BIMSTEC or RCEP India can enforce better enforcement of protection of the rights in the content of the for the prevention or better regulation of Indian creative industry. 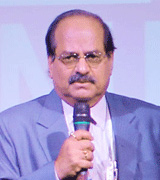 The Media & Entertainment Chapter of the NASCAP is headed by Mr. Supran  Sen who has been associated with the Film Industry for the last 41 years and has held several key positions in various associations in the media sphere. He has been the Secretary for General Film Federation of India, General Film and TV Producers Guild of India, Indian Motion Pictures Association of India, Indian Motion Pictures Distributors Association, All India Film Producers Council, Theatre Owners Association, Indian Film Exporters Association and Film Makers combine.

He has also been a Consultant for Entertainment Division (FICCI) and Modi Entertaining Group and Member of Copyright Enforcement Council Government of India and a Board Member (Executive Committee), International Federation of Film Producers Associates.

He has also been a Founder and a Director (Coordination) on the board of Mumbai Academy of Moving Images. He has also participated in all major Film Festivals/Markets around the world including in Cannes, Berlin, Bangladesh, Venice, Locarno, Rome, Hong Kong, Denmark, Hungary and in The United States of America.

He is an important functionary in the recommendations for various Indian Films to the National Film Awards and the International Film Festival of India (FIAPF accreditation). He has, on behalf of Film Federation of India strategised and created the existing system for selection of India’s representative film in the ‘Best Foreign Language’ category at the Academy Awards, based on Oscar guidelines.